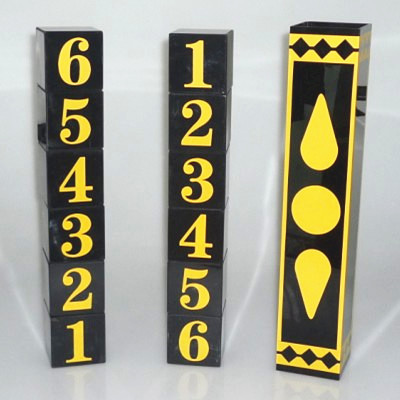 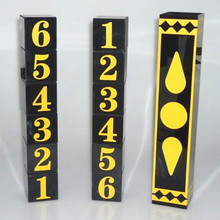 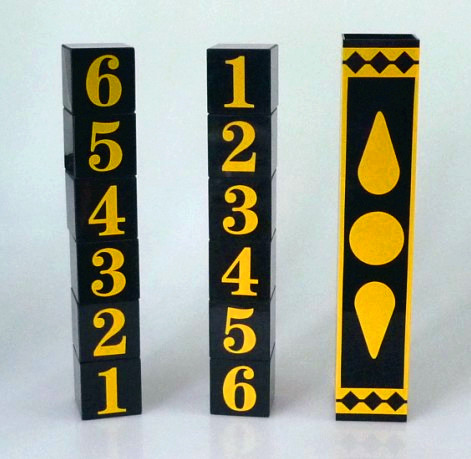 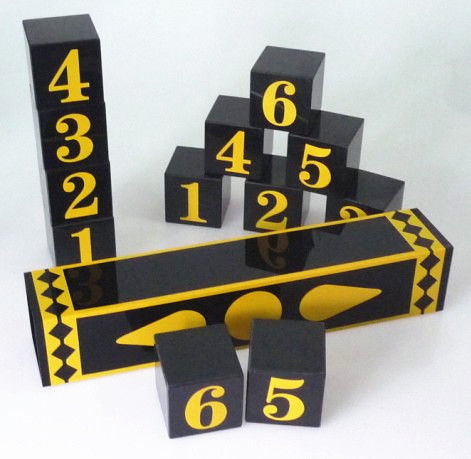 Your action packed routine can be from four minutes to several minutes in a fast paced routine that always makes the audience ooh and ahh. You'll feel like a real magician as you run through the paces and see the looks of astonishment as the audience watches the impossible happen right before their eyes.

The premise is so simple that it can be performed for children and yet so tastefully sophisticated you'll want to incorporate it in your high end corporate shows too. While it's not required to have volunteers come on stage, you may structure your performance with someone assisting so the audience can watch the looks of amazement on your helpers face.

Here is what happens:

Two stacks of six separate blocks are displayed. Both sets are numbered from 1 to 6, as in the picture. The performer explains to the audience that one stack may be arranged in any order and yet the other stack will magically rearrange itself and match. The actions are performed several times in an easy to follow sequence. Each time the second stack is revealed you will experience a resounding round of applause as the audience acknowledges how perplexed and entertained they are. The best way to describe this effect is to say "This trick is the reason people want to see a magic show". You'll get the satisfaction of appearing to do nothing yet the magic happens in your hands. The entire routine is logical from beginning to end.

The first stack of blocks are rearranged several times including turning some of them backwards and upside down. In each case, the second stack matches, and it's a mind blower to the audience no matter what age they are and how much magic they have seen in their lifetime. Even other magicians are without a clue if you don't tell them the secret.

The conclusion happens when a volunteer gives you an irregular order to stack the first set of blocks and the second stack still matches perfectly. The conclusion always generates a swell of emotion from the audience followed by spontaneous applause. It's an automatic applause que.

Here is what you get:
12 blocks with permanent numbers (The blocks are 2.8 inches )
The tube (17 inches tall) and strong enough to stand on!
Detailed video Instructions

Shipping the product has a dimensional weight: 4.2kg