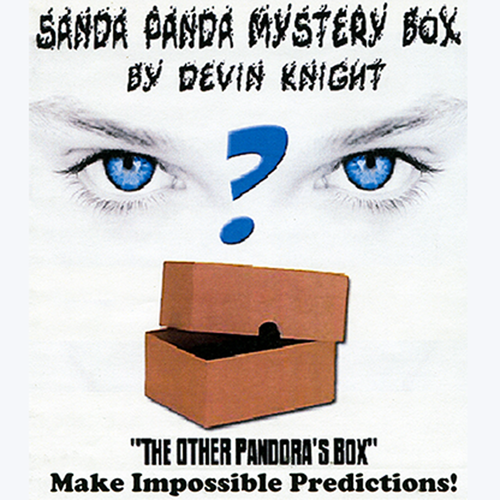 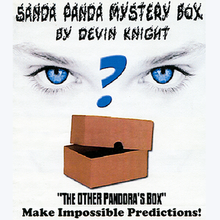 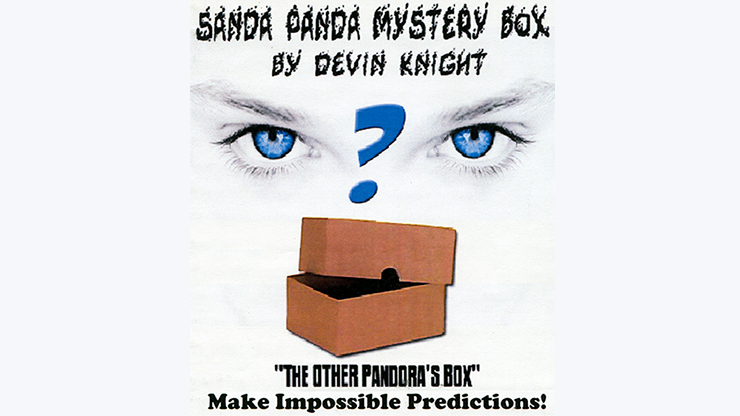 Description:
"The routines are all very smart and practical, Mr Knight has good advice to offer...." -Ian Rowland, The Magic Circular Magazine
The SANDA Panda Mystery Box is an ungimmicked 6"x 4" cardboard box. It is always in full view and gives you the ability to make nearly-impossible predictions. No pre-show work, and all are ONE-MAN effects. No secret assistants or stooges are used in any of the effects. NO FORCES of any kind are used in any effect.

IMPOSSIBLE CARD PREDICTION: Two participants form a card to ensure the choice is random. One chooses the suit and the other the value with no restrictions. You remove the lid from the box - inside is a deck of cards and a folded 8" x 5" piece of paper. The participant unfolds the paper. Written on it is THE CARD JUST NAMED IS IN POSITION 14 FROM THE TOP. The participant removes the deck and counts down to the 14th card from the top. It is the same card just formed at random. No switches or sleights used. The participant takes out the paper and deck from the box. THE PERFORMER DOES NOT STICK HIS HAND INSIDE THE BOX, NOR DOES HE TOUCH THE PAPER OR DECK!

LADYLOVE: The closed box is on a table in full view. Any man stands and is asked to tell you the first name of his wife or girlfriend. Assume he says, "Sandy." He comes forward and takes out a rose from inside the box. ATTACHED to the rose is a note that reads, "Give this rose to Sandy." This is an amazing, but romantic, bit of business that is very strong and involves no pre-show work. The magician never touches the flower or note. Everything can be left for examination.

UNCANNY BOOK TEST: A small book is inside the closed box. Anyone calls out a page number. Another participant comes up and takes the book out of the box. He turns to the page number just named, looks at the first word on the page and reads it aloud. You instruct him to take out the folded paper from the box and unfold it. Written on it is the word he just read aloud. Baffling beyond words!

If the performer wishes, any of the above predictions can be INSIDE AN ENVELOPE that is inside the box. This adds yet another layer of mystery to the effect.

DEAL OR NO DEAL: The performer says that he took a picture earlier of what is inside the box. In the photograph is a hundred-dollar bill wrapped around a deck of cards and one folded playing card. The performer says he folded the card so the person cannot see what it is. The performer offers to play a game of chance with the participant. All the participant has to do to win the $100.00, is to select any card that is NOT the same as the folded card inside the box. His odds of winning the money are 51 out of 52.

PRECOGNITIVE COLD-READING: A detailed (not vague) answer to a question asked by the client is found inside the box. The performer apparently wrote the answer before the person even asked it. This will convince the skeptics you are psychic. Takes cold-reading to a new level.

In all these effects, everything can be left for examination. This effect comes complete with the box and detailed directions on how to perform all these effects. The effects possible with the SANDA Panda Mystery Box are unlimited.