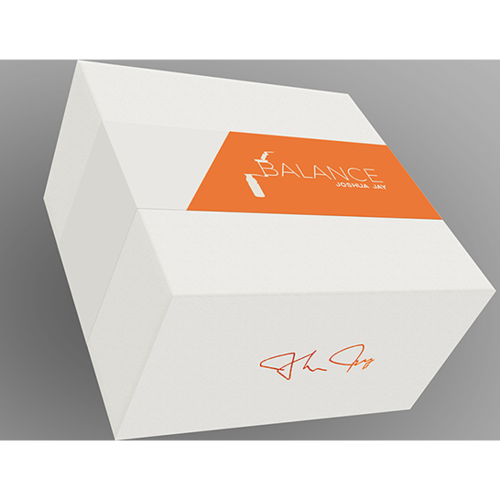 Description:
"I really do love this. In the right hands this is a beautiful piece of magic - it is the type of magic, I feel, that elevates our art. Again, those who truly understand that magic is about wonderment will creating moments in your show will really appreciate this and get use out of it." -Paul Romhany, *Reviews Vanish Magazine
First came "Inferno," which won Trick of the Year in 2012. Then came "Out of Sight," which fooled Penn & Teller. After eight years of development, performed exclusively at the end of Joshua Jay's parlor shows, he is ready to unveil a sensational, unique wonder... AND SAVE if you buy early because the retail price goes up $50 on January 1st, 2019.

Balance features the rarest effect in magic: suspension. An eclectic but ordinary group of objects is passed out for close examination: a bottle, a card box, a pencil, a toothbrush, and a crayon box. NOTHING sticky, no strings - totally normal.

The objects are collected and, one by one, the objects are stacked, first in ways that seem impressive but possible, and then in ways that are COMPLETELY impossible. At the end, your audience is left with a stunning, impossible sculpture -- each object hanging impossibly in the air without explanation.

Balance is the perfect closer or encore piece for a parlor show because it is SO unlike anything else that would appear in a magic show. And unlike most magic, Balance LIVES in a state of impossibility. With every phase you build, the magic is staring at your audience, even after you've left the stage.

A New Kind of Magic: One thing Joshua didn't expect as he developed Balance is the unusual, 21st-century quality associated with it. People HAVE to take pictures of it. They can't help themselves. It's too unusual NOT to remember, and everyone wants to take home evidence of what they've seen. Over time, Joshua has learned to lean into this, actually allowing his audiences to film it and get pictures of it afterward.

A Stunning Package of Props: You receive everything you need to perform Balance in a beautiful foil-encrusted box. Your props for the trick are kept in a velvet box that allows you to switch the examined objects for the specially-made props imperceptibly onstage, without any special pockets or servante. The hinged box has protective "wings," so you can perform Balance virtually surrounded. You receive ten hand-crafted props that have each been designed under Josh's watchful eye. And, you get Joshua Jay on video, one of magic's best teachers, taking you through every detail of the routine.

Perform it Immediately: Joshua's creations take years to develop and, in some cases, years of practice to perform. Happily, Balance can be performed within MINUTES of opening the box for the first time. The only skill you'll need is FAKING the difficulty of doing it.

Exclusivity: Due to the extremely intense manufacturing process, and the years of development, Balance is offered at $200. When you SEE the package, you'll realize what a bargain this is. The whole package exudes quality, and this is a small investment in what will become the closing piece of your show. And, the price will necessarily keep the routine from becoming over-exposed. You will likely be the only one in your area performing Balance.

Quality You Can't Fake: Joshua Jay does NOT release magic often. We get a glimpse into his creative process every five years or so, when he releases something new. That's why his magic -- from "Triad Coins" to "Inferno" to "Out of Sight" -- is IMMEDIATELY snatched up upon release, and it's hard to keep his creations in stock. He thinks through every aspect of an effect, from the theatrics to the product design, right down to how to reset between shows. THAT is what you're investing in with Balance: years of painstaking detail.